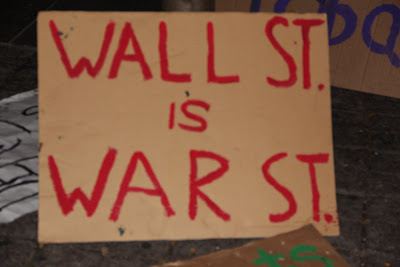 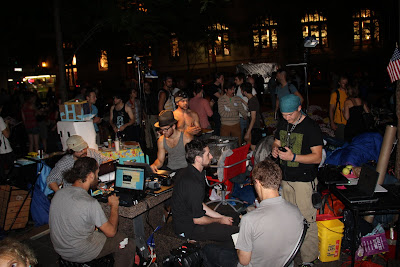 If yall havent noticed, theres an interesting situation going on in New York City's financial sector. Since September 17th, a group of folks has been camped out in Zuccoti Park a couple of blocks away from Wall St, protesting everything from corporate greed, foreclosed homes and the bailout. Organized via social media and the internet, #OccupyWallStreet has caught the attention of the world. The world is watching mainly because last Thursday, about 100 folks were arrested and many more brutalized. Numerous videos of NYPD's brutality have gone viral, especially one of peaceful female protestors being maced by a ranking NYPD official. Thursdays protests happened after a Troy Davis memorial march met up with Wall Street Occupiers who had marched and met up in solidarity. The result was the NYPD once again brutalizing peaceful people with batons, mace, and unnecessary violence. Since then, the movement has picked up strength and received mainstream media coverage, along with visits from celebrities like Cornel West, Michael Moore and Susan Sarandon. Out of curiosity we visited with the RDACBX team after a meeting and the result wasnt the greatest. Besides being stared at and looked at as if we were invading their space, the predominantly young, white and liberal Occupiers sent over one of the few African American men over to talk to us. When we asked them why they didnt approach us themselves and build with us, they replied that "they thought we would get mad because they were white." The situation was pretty bizarre as a woman started ranting incoherently about Nazi symbols being seen over the skies of California, and another man from the Media Team repeatedly offering us the chance to perform if we spoke to the Arts and Culture team. He didnt seem to get that we werent there to perform, rather we were there just to build. After being mean mugged for taking a free slice of Pizza, we decided it was time to leave the hippie fest.
Our intention is not to dismiss it as just this, but the gut feeling was that there is a serious disconnect down there. We left with mad questions! Where was the hood? Where was the poorest congressional district in the USA, from The South Bronx at? Like we say in Hip Hop, where Brooklyn at? Could it be that perhaps the working class couldnt afford to just leave work and the responsibility of bills and family survival to camp out in a city park? Did folks from our communities not know about this? If people of color were occupying Wall St would we have lasted this long? All in all the questions remain, yet with time and reflection , we refuse to just dismiss it. Its a historic time in the world in which general assemblies are starting to happen all over, as cities across the US are also now having "occupations".
Our analysis on whats going in Wall Street is that its very similar to the Syntagma Square uprisings in Greece, and other city squares like the ones in Madrid. In these movements, there is no central leadership, its about something, but then again not really, because the demands arent clear. What is clear is the identification of the common enemy : the greedy banks. The Occupiers are organized thru new means of communication; the internet, social media like Facebook,Twitter and U Stream. We can now see the occupation live 24 hrs a day, folks are tuning in directly from all over the world. There is an obvious access to some privilege as the MacBook Pros and coffee seem to be part of the growing everyday scenery. The revolution attempt here has made sure to hash tag itself just as #Jan25th did in Egypt. #OccupyWallStreet seems to be a new phenomenon in that we are witnessing a first generation in which massive numbers of young white people are no longer experiencing the economic benefits of the capitalist system. Their working class parents have had their homes foreclosed, their school loans cant be paid because they too now are unemployed or underpaid in the shrinking job market. Their reality has gotten closer to what black and brown folks have lived for many many years. There is a blatant economic inequality in this country and it is a result of corporate Wall St greed. The middle class is almost extinct as most people nowadays are working merely to survive and pay bills. We encourage folks to support the occupations and see them for themselves. Perhaps the topless nude activists, or the drum circle may not be for you, but the idea of having a national dialogue sparked about these greedy bankers and their abuse of the people is important and needed. We plan on going back with more people!!
All Power to the People!! 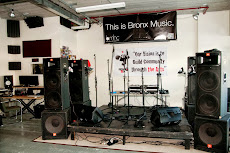 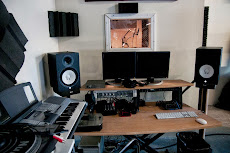